…are universally pretty bad. I went out of my way to get something a bit better than the standard 640×480 res on my phone, but still anything that’s dark comes out grainy. Still, I find I capture many more moments now that I have the camera as part of my phone (which means it’s usually with me).

I read about a program called GREYCstoration on Digg.. but 30 seconds of playing with it’s CLI options left me with nothing. Still, the idea of removing “grain” (?) from pictures, especially dark ones, was interesting. So I downloaded a free version of Neat Image. Here’s before(left)-and-after(right) pictures of my friend Iain hailing us a subway on a recent trip to New York (click for full-res versions): 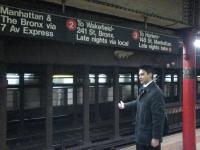 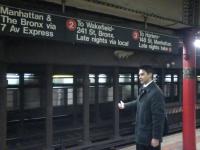 Nice improvement, no? I wonder if it’s cheaper for a manufacturer to put better optics in a phone, or to give it a bit more CPU horsepower to do this kind of filtering in the phone on-the-fly? Maybe the better question is if people who are happy just to be able to take pics on their phone are “discerning” enough to care and pay for the extra quality? Maybe not…

Two more samples of the filtering: a Korean grill dinner with friends in downtown Toronto: 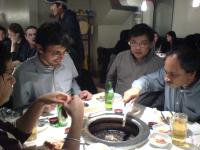 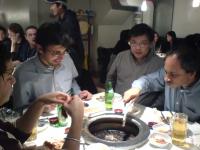 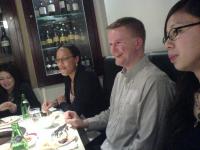 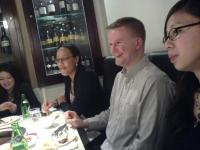 A couple months ago I bought a new Dell LCD. My old monitor was getting so dim that it was hard to watch movies, and the price was right, so it was an easy decision.

The problem with a newer larger screen, especially a LCD, is that you tend to want to play games at the “native” resolution, which for this model was 1920×1200. To do that I had to basically turn down/off all the features that made things look good. That sucked. But I had a way out…

When I bought my motherboard and video card I bought a “SLI” model that uses PCIe. I didn’t really need that feature at the time: and I have a bad record for buying features “I may need some day” that I never end up using. But this time I got lucky.

The SLI feature lets you join 2 video cards together to share the load. But the problem was you need 2 identical cards… and it’s very difficult to find a second identical card months after buying the first because the tech and brands change so often. But almost the same day I started to look into it I saw Nvidia had released a new driver set with this interesting feature:

Still, who knows if it would work? I emailed the support alias for my current card, and they all but guaranteed it wouldn’t. Undeterred, I ordered a second card, from a different vendor, with a different firmware version and different CPU and memory speeds. But the important bit was the same: a Nvidia 7800GT chipset. 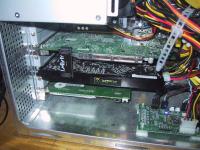 The black XFX card on the bottom is the new one, and it’s connected to the original card above it using the black “LanParty” SLI bridge that came with the motherboard.

There’s games I want to revisit now, such as Half-Life 2 and Far Cry (not to mention Quake 4 and FEAR that I haven’t played yet) that I can now play in higher res with AA/AF etc. But first, sadly enough, I want to finish replaying an old classic that makes absolutely no use of the large screen or spiffy video cards. Think you can identify it? Click here

Give this posting a quick read.

Will people find a use for (or at least will they pay for) faster internet service? This is the interesting table from that article (copied locally so as not to abuse that bloggers bandwidth: I didn’t make it):

Right now, assuming the average widely-available download speed is 1.5Mbps, people don’t mind sitting around and waiting for a MP3 to download so they can listen to it. Waiting 15 minutes for a 30 minute TV show is about as much time as I’d hang around for semi-immediate gratification. But, today, do people sit in front of their computers for an hour waiting for a 2 hour movie to download? Or almost 4 hours for a DVD image?

That requires kicking off a download now and remembering to come back to view it later. Honestly that’s a bit much to ask for a person who could otherwise just turn on a TV, rent the the DVD, or even drive to the theatre… watch the movie… and come back before the download completes.

But would they wait around 12 minutes for a DVD? Absolutely! It boggles my mind how people can think that excess capacity won’t be used: when there’s already a huge market for entertainment at the quality of a regular movie or DVD. Look at the market for higher megapixel cameras. Driving higher resolutions for games on computers. Big-screen and HDTV TV’s. Digital cable and satellite subscriptions. People will pay to put prettier pictures in front of their eyeballs… and that table shows that people can get higher quality entertainment with near-immediate gratification by paying for quicker internet access.

I pay about $90/month for Internet now. Which sounds like a lot, until you consider that connectivity replaces the costs I’d otherwise pay for news/cableTV (web sites) and phone bills (Skype and webcam). Would I pay for faster access? Possibly: right now Toronto has excellent (for North America) speeds for DSL and cable ISP services… so I wouldn’t pay for extra download capacity. Though I would pay for extra upload capacity.

…to just throw stuff out?

I did a bit of pre-Xmas cleanup today, and pulled a dusty old computer out of my closet. I remember it used to be my firewall, so it had Linux on it, but other than that I couldn’t remember the last time it was used. So I plugged it in and as luck would have it, it booted! The filesystem checker shows I had neglected it since 2002…

It was a AMD 486 DX4-133 w/16MB RAM and a 10GB disk drive, running Slackware 8.1. Back when I was in UWO it was a kick-ass system… now my old PDA could run circles around it, and my cell phone would probably give it a run for its money.

I hate getting rid of things that still work. Hate it. But for the life of me I can’t think of a use for this old PC.

I suppose I should wipe it of any personal info, and send it to meet its maker…

…so, for the last few days my Rogers cable internet connection has been acting strangely. BitTorrent (BT) downloads were coming in at a trickle, yet both the Rogers and Sympatico speed tests showed things were fine. Debian updates were lightning quick downloading, and FTP uploads would max the connection… so it wasn’t a problem with the modem or signal strength.

After combing through firewall and routing rules to see if I messed things up (though I hadn’t changed anything), I decided to check some newsgroups and ISP forums.

It turns out many people had seen the same problems, and some claim to have talked to Rogers reps on the phone and were told that, yes, BT in general was being throttled. And it sounded more sophisticated than just port throttling, as people that were using non-standard ports were affected too. Suggested workaround: change your BT listen port to 1720, as 1720 is apparently the port used by Rogers’ own VoIP service (and thus opted out of any sort of throttling).

So I made the change…

…and my BT speeds jumped from what were 5KB/s up and down, to capping my upload and 200KB/s download (see jump at 10am):

All my Linux distribution downloads use BT, as do games like World of Warcraft for their updates. I wonder if enough people will complain about their legit BT downloads being throttled that Rogers will revert the change?

I have two Pioneer 109 DVD burners (one white, one black) bought 3 months apart. Identical firmware. After making coasters of about 20 Memorex DL media the last couple months I finally clue in that the white one works 100% of the time for the Memorex media, the black one fails to verify the second layer 95% of the time.

??? They’re supposed to be identical burners.

All other media I’ve used, any brand, burned at any speed, work fine for both. I switched which burner I used as primary when I did some hardware upgrades, and never figured out that’s when the problem started.

So, I’ve tossed about $40 of good media in the trash the last few weeks, just because I didn’t look at the problem sooner. Bah!

My name is Mike Kirk, and I work at SWI. I spend my days working with CASSI, fiddling with RC Cars, and playing with PC Games and VR.