This is was my old charging setup: 50w and 80w chargers fed from a 24a 12v power supply. All of those pieces came used as part of other RC bundles I bought, and they worked fine, but they charged and discharged slowly. 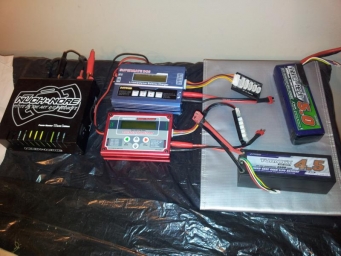 For 2s lipos the 80w charger wasn’t so bad since it could do 10a… but as battery capacity went up past 5000mah it could no longer even do 2C. And for 4s batteries it was capped at 6a: barely over 1c. The discharge capabilities were also low: 1a/2a max, so “storage charging” batteries I didn’t end up using took a long time. Time for an upgrade.

I had a charger in mind, but first I would need a larger supply – I wanted to charge two 4s 5000mah lipos at 4c with a bit of headroom for larger batteries down the road. So the 24a supply wouldn’t be enough. Enter Robert from RCC: he sells computer server power supplies wired up to be general 12-volt supplies, primarily for use by RC hobbiests. I ordered a 900w 75a HP model from him and it arrived in the mail in a couple of days: 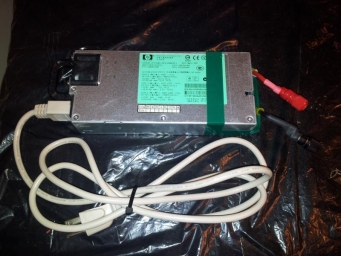 He adds 4mm female bullet connectors to the proper places on the backplane and makes sure the wires have a bit of stress-relief: 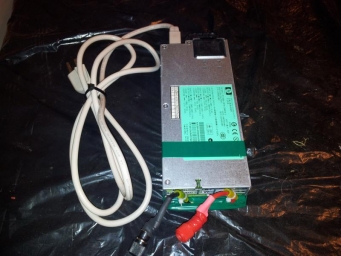 The new supply worked perfectly with my old chargers: with a quiet fan it was only warm to the touch. My only wish was that it had an on/off switch, but unplugging it is no great hardship. Thanks Robert! But now to use that extra power: to HobbyKing I went! Just over a week later a small box showed up for me at work: 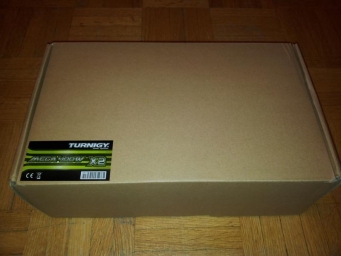 It had thick 10-gauge power leads with standard bullets, 2 sets of charging leads, 2 balance adapter, a set of large alligator clips, and a set of alligator-to-4mm leads. There was no manual beyond a piece of paper to say to go online and download it. The charger was heavier than both my others combined with fans on each end and a large heatsink running the entire width. 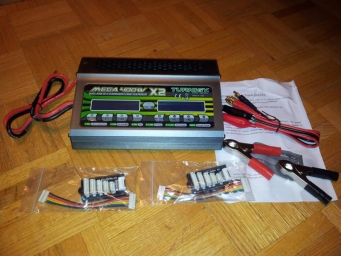 One of the first thing I tried was the discharge/storage cycles. It claimed 5a/50w discharge, divided into 2 x 25w (essentially how much power it could dissipate as heat). That 5a drain is what you get with a 1s lipo: for 2s it let me dial in 3a, and for 4s it was closer to 1.5. Still it was much higher than my old chargers. Why does anyone care how fast a charger can discharge a battery? Because lipo batteries have the longest life when they’re stored at just over half charge (standard discharged voltage is 3.2v, charged is 4.2v, and storage charge is around 3.8/3.85v). So if you don’t use all your batteries after going out to play (came home early, got bored, broke something) you need to discharge them before you’re “done” for the day. The faster a charger can bring a battery back to 3.8/3.85v (either charging or discharging) the sooner you’re done. 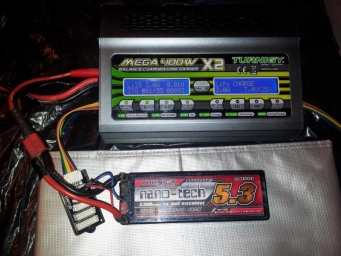 Next I tried higher power charging my 4s lipos. My previous chargers could do (6a+5a=) 11a at 16.8v. Here I had already finished my cycles before thinking of taking a picture, but it shows 18a+13a= 31a at 16.8v (I had been charging at 18a+20a). No problems! Charger stayed cool and the power supply only got warm 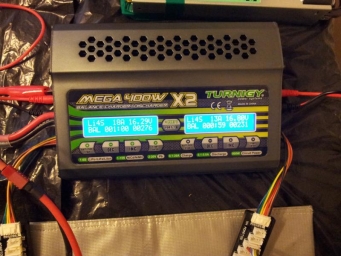 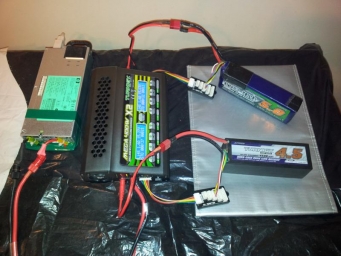 Now my thoughts on the “Turnigy MEGA 400Wx2” charger so far: