I’ve been wanting to buy a 4wd Stadium Truck… the problem was that nobody really sells them off-the-shelf (with one exception). I had looked at various 4wd platforms to build by own… and had decided to try something based on the new ECX chassis if I could find one cheap…

…and eventually I found one…

I found the “Ruckus” Monster Truck variant for a good price: a bit ugly because the last owner attacked it with a can of black spray paint… but the guts were good: 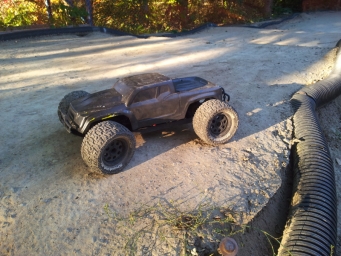 Here’s the stock Ruckus electrics and chassis. It was too long to fit a Stadium Truck body… but I could buy a shorter frame for the “Circuit” model to bring it down to size: 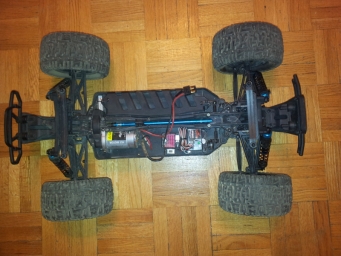 After some quality time with my electric screwdriver, here it is with the short chassis (trimming about 4cm from the middle) and with the new budget electrics. Hitec metal-gear servo, HobbyKing X-Car 120a ESC, and Tacon 2-pole 3500kv 550-can motor. 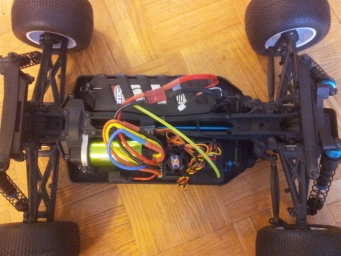 The stock ECX Circuit didn’t run real 2.2″ Stadium Truck tires. TLR 22T rims were much too narrow… but AE T4.2 rims were close. To get them mounted I added 10mm-long 12mm hexes from Ebay… that were drilled out a tiny bit from a 5mm hole to a 6mm hole on the axle side. Now the AE rims fit with perfect clearance! 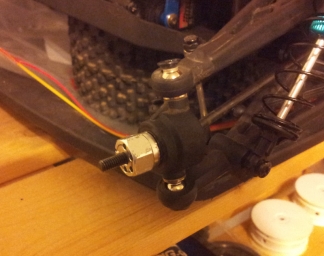 Then I swapped the front and rear body posts around and painted up a Pro-Line Bulldog ST body made for a Traxxas Rustler. Finally, I had the look of a regular 2wd Stadium Truck… but with 4wd! 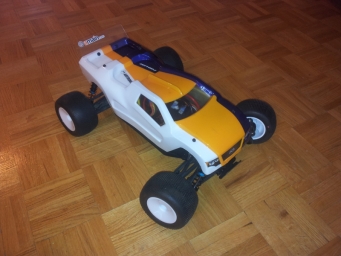 I also bought some Traxxas adjustable rear-camber and front-steering links, but haven’t mounted them yet. In the end even though the chassis only shrunk about 4cm… by the time you take off the front+rear bumpers, add the slammed ST body, and shrink the tires by an inch you get a noticably smaller truck: 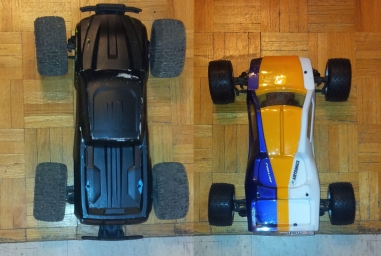 Time for it to join the fleet and get back on the track! 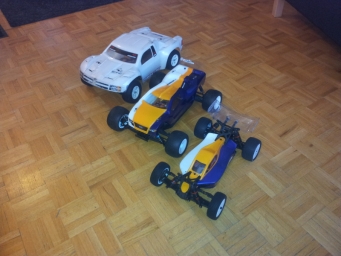 One thought on “Doing the Circuit”