I had read about a weakness in the ECX 1/10th 4wd platform… but it wasn’t until I had crashed my Circuit a few times that I really knew what people were talking about. The front A-arms seem strong enough… but the hingepin braces that hold them have a problem: they’re not attached to the front diff case very well. A solid hit will push the A-arm backwards and rip the rear brace out of the back of the diff, stripping the short Phillips screws that hold it on. 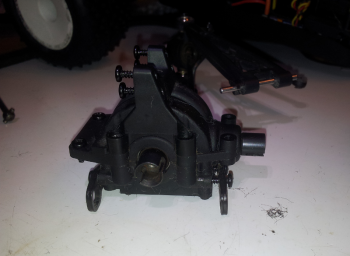 When you break an A-arm in most cars they’re easy to replace. When you strip the rear hingepin brace out of the front diff on a 4wd ECX you have to take out at least 20 screws to get at it, and if you have to replace the case it can be messy (as the front diff has probably leaked some oil, or is coated in grease). After reading about how others are trying to fix this problem, I took a stab at it myself. First I used a 3/32″ drill bit and drilled the case from both sides, to make one single hole from front to back: 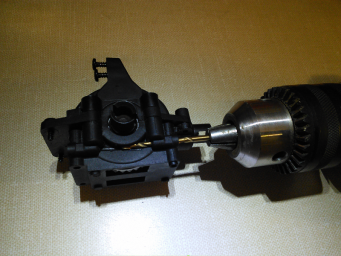 Then I ran a M3 * 60mm cap-head screw through the whole thing. I had estimated the length of the screw I needed before taking the diff out: if I did it again I’d order M3 * 55mm as 60 is a bit too long: 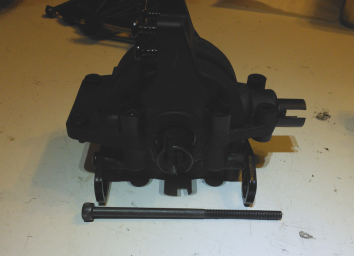 You can see that the hole you drill nibbles a bit into the underside of the diff bearing mounts, but there’s still lots of plastic there and it doesn’t penetrate the case. The screw is only half exposed under the bearing: 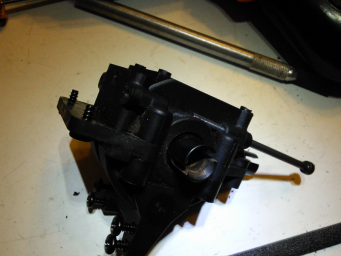 Since I had the drill out anyways, I predrilled a second front bottom diff case and left the screws in. If I have to make this repair again it will save some time:

At first I planned to have the head of the screw at the front of the diff (behind the front bumper)… but then it looked like the extra 5mm of thread would interfere with the steering rack. So although it was harder to get at for maintenance… I put the screw head towards the middle of the car and secured the threads at the front with a M3 locknut: 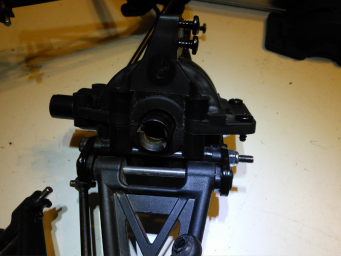 The extra thread+locknut had clearance behind the front bumper, so that worked out fine: but once I got the A-Arms reattached I could see the steering limiters would have stopped the steering rack before it hit the locknut (if I has put the screw in the other direction). So, if anyone else tries this, buy M3 * 55mm screws instead, and put the locknut towards the middle of the chassis. 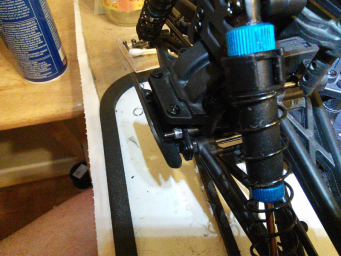 This mod makes the front hingepin system much stronger. I don’t like breaking parts but I’m willing to replace more front A-Arms if it means the front diff stays intact and the hingepin screws don’t strip.

While I had the tires off I also replaced the stock fixed-length links with adjustable replacements from Traxxas. TRA3644 for the front steering and TRA3643 for the rear camber: 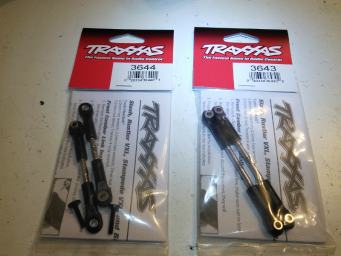 Front before and after: 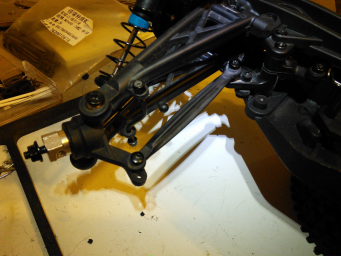 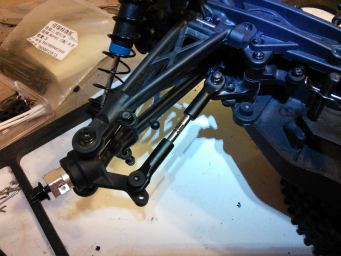 Rear before and after: 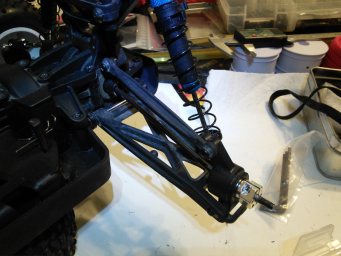 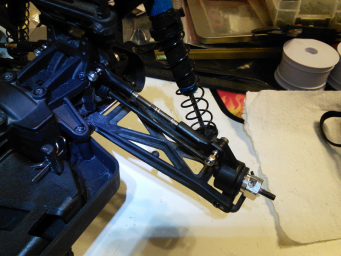 Now it’s time to take it back to NRC and see if I can break it again! 🙂