A couple of weeks ago I put a larger motor in my toy car. After running a few battery packs through it I noticed it occasionally making a “tick” noise when braking.

Then a few ticks if I stopped hard.

Then I started to hear it in reverse too. I thought it was because the drive cups were wearing and when I was in reverse (or slowing) they would bind… so I placed an order for new ones and crossed my fingers I could drive until they arrived.

Today by the time I went through three packs it was more of a full-on ratcheting sound when I reversed. I tried spinning all the driveshafts by hand but couldn’t detect where the problem was. Until I watched the wheels when I braked hard: the backs could lock up but the front tires would continue to roll. Since RC cars don’t have antilock front brakes… something was slipping in the front gearbox.

The stock grease in that gearbox is red, and the fluid in the sealed differential is clear… so I knew it was bad when I opened things up and saw grey. The metal gears are grey 🙂 . Both the main driven gears had teeth worn down and bent sideways: 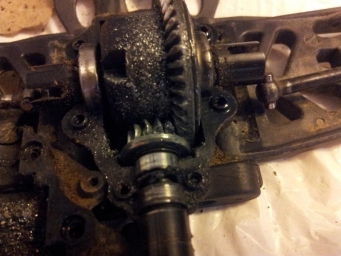 It was hard to see how many metal flakes had been worn off and mixed into the lubricant: but when I turned on the flash in the camera they really stood out: silver everywhere. 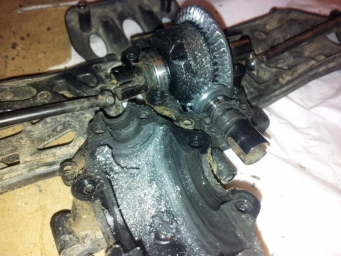 What happened? I had shimmed the diffs so there was no free play… but when I pulled the center driveshaft I could see the problem right away. Ball bearings aren’t supposed to sit on a shaft at an angle: 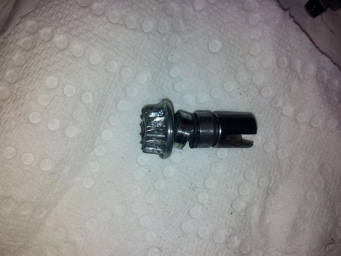 The innermost bearing was hollow: it has self-destructed and dumped its little bearing guts into the gearbox. The outer bearing was heavily damaged but intact… it looks like it kept the shaft in place well enough it would “dig in” to the larger gear when moving forward, but would deflect away and ratchet in reverse.

Bad luck with a dodgy stock bearing? Design weakness made worse by the stronger motor? First thing’s first: see if it’s repeatable 🙂 – a complete gearbox with bearings/differential/drivecups is only $20. I just have to wait for the mailman to bring it to me…