Months ago when I was looking for a new motor for my Redcat Caldera SC-10E I saw a forum post and video for what claimed to be the best deal ever: a Tacon 3674 motor. Alas… it was also out-of-stock for months after that video… so I bought the next best thing for a bit more money: a Leopard Hobby 2650kv 3674 sensorless brushless motor.

I knew even before ordering it that it would be a bit of a project. Why? Because it was about 1/3rd longer than the green Tacon 3500kv that I currently owned: 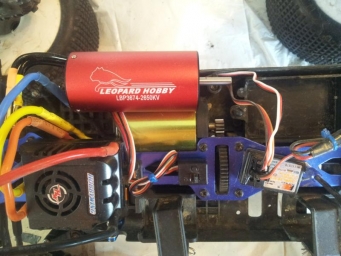 …and the space the motor fit in was too short. About 1cm behind the Tacon motor was a grid-type pattern of plastic molded into the chassis: apparently as reinforcement. But I owned a Dremel, so I figured I could trim it down and wedge the big red Leopard in there 🙂 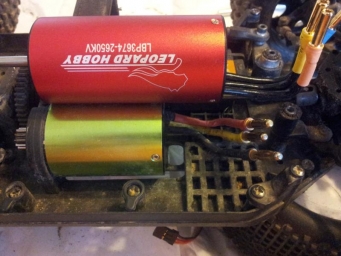 But first I had to take everything apart. The RedCat is very modular: 13 small screws come out of the top of the center blue aluminum chassis brace… 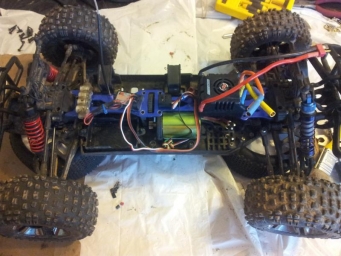 …and the brace comes off with all my electrics. That’s not the regular location for the radio and ESC, but I’ve been fiddling with the Caldera enough it was a convenient spot to place them. Plus I was using a larger 1/8th-scale ESC temporarily… as the original model was mounted about 3″ above the ground when it was driven into about 4″ of water in a stream (not by me) 🙂 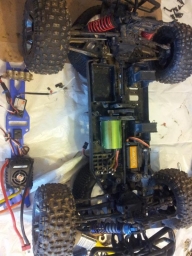 The front and rear ends are also modular: with the suspension, bumpers and body mounts attached to the gearboxes. Four screws for the rear, eight screws for the front, and seven screws for the center diff and the entire truck basically falls apart… leaving me with a chassis that needed some gentle love from my favorite rotary tool. 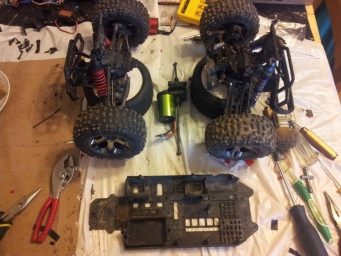 Now that things were apart I could easily measure how much of that grid pattern needed to be trimmed away: 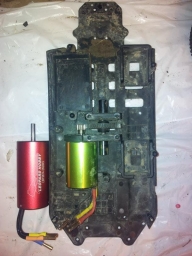 Did I mention the RedCat was modular? 🙂 Even the chassis is built of three pieces, so I could detach just the edge I needed to work on: 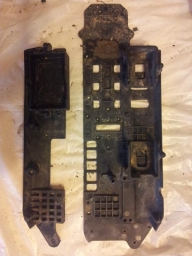 And here’s the result after some Dremeling, cleaning, and reassembly. I had initially nibbled away a 3×2 pattern, but it wasn’t quite long enough, so ended up sawing off 3×2.5 blocks: 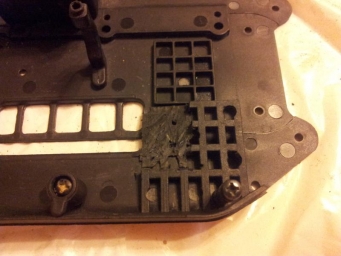 While I had the chassis apart I mounted the new motor with a 5mm 32p 13t pinion. It’s easy to adjust the mesh: instead of trying to get at the motor-mount screws while the center diff is in the truck you can take out the top front+rear brace screws, and the bottom center-diff screws – which leaves the diff firmly attached to the aluminum plate with extremely easy access to the motor. You basically get the guts of the powertrain on a stick: 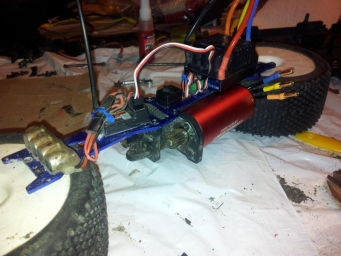 Here it is all mounted back up… 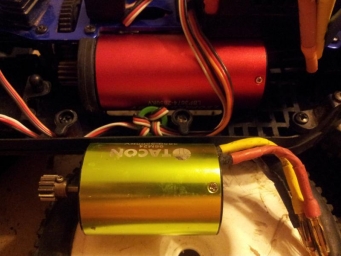 …and a final shot of the new shiny red Leopard ready-to-run. I just finished the heart transplant before bed, but will take it for a drive tomorrow. 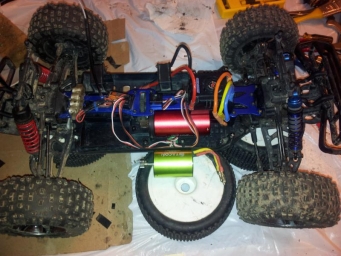 I’ll be running the new setup on higher voltage (11.1v vs. 8.4v) to offset the lower KV motor, and with the 13t pinion the gearing should give me a 10% increase in top speed. But I didn’t gear it for speed: instead I’m hoping for much stronger acceleration. Mashing the throttle should either break all four tires loose, or have it try its best to flip over backwards 🙂