One of the most common “off-brand” RC monster trucks is the HSP Brontosaurus (aka Redcat Volcano EPX Pro, aka Exceed Infinitive). It comes brushed or brushless in a rainbow of colours, and has been rebranded by a dozen different companies. Is it a race machine? No. Is it cheap enough you don’t care if you break it? Yes! 🙂

I saw a great used deal online and couldn’t say no: it came ready-to-run with a space parts chassis: 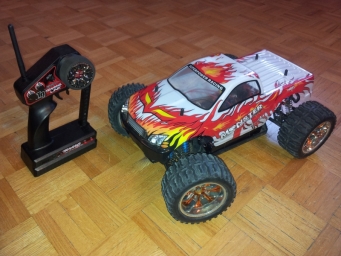 It actually came with so many extras I sold some to offset the cost, but first I took it out to bash in the local park: 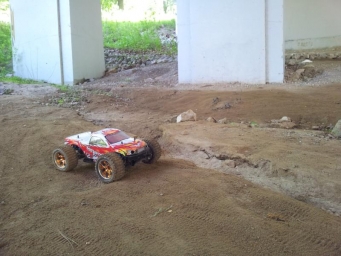 This model of truck has a known problem with the rear suspension: the stock dogbones are a bit too long and prevent the chassis from making it all the way to the ground.

The fix is simple enough: use shorter dogbones… but after reading a number of forum posts I couldn’t figure out what part numbers were a bit shorter and which were the same length. Since they were only a few dollars each shipped on Ebay… I just bought a bunch of them 🙂 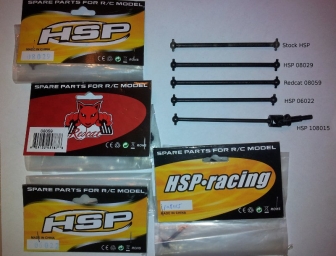 If you have a Brontosaurus/Volcano/Infinitive you want HSP part number 06022. My stock dogbones, HSP 08029 and Redcat 08059 were all exactly the same length: too long. I tried the HSP 108015 universal but it was also too long, even to long to be put in the front of the truck. With those slightly shorter 06022’s swapped in the rear of the chassis could make it all the way down to the ground: success!

The stock tires were pretty horrible so I sold them, and swapped in the ProLine Badlands I was running on my old Redcat Caldera. Time to go back to the park! 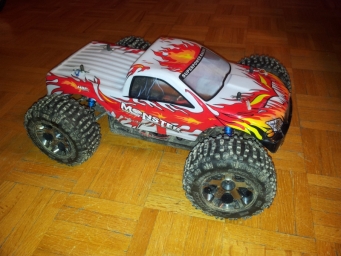 Speaking of the Caldera, I’ve seen some people asking about it, especially since the brushless Redcat Caldera (BSD rebrand) and Redcat Volcano (HSP rebrand) aren’t too far apart in price. I’ve owned both (the Caldera much longer) so these are my thoughts so far:

Both trucks are based on a core onroad platform with NiCAD/NiMH cell cutouts on the bottom – those slots are basically a cheese grater against the dirt if the chassis ever slaps, so sand and dirt will get everywhere. Overall both are good bang-for-your-buck entry-level trucks and it’s hard to pick between them. If I were forced to buy one or the other today … I think… I would choose the Volcano/Brontosaurus. Why? Three main reasons:

That’s it for now: I’ve been feeling sick all afternoon and it’s time for bed. I had these photos queued up for so long I just wanted to get them posted….