On the weekend I lucked out and won a new Redcat nitro buggy: but since I only use electric RCs right now the friendly folks at Amazing RC Store let me use it towards an upgrade: a 1/6th scale Shredder SC! It’s the big brother to the Caldera SC 10E I bought from them about 2 months ago. It’s huge! 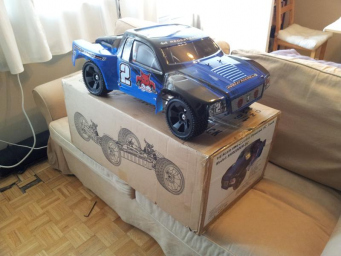 Here it is with the 1/10th scale Caldera for comparison: 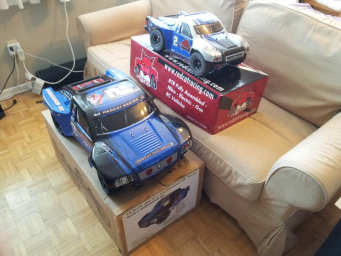 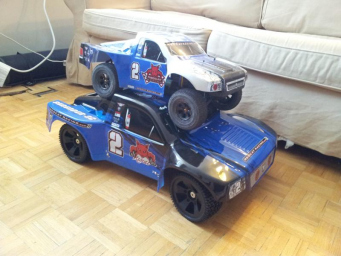 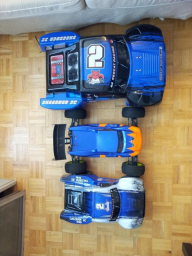 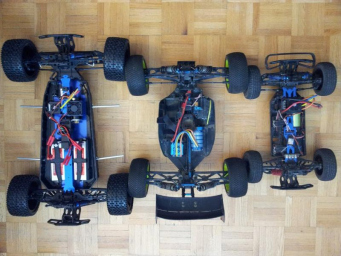 ..and finally beside the body. Note that it has 4 aluminum rods sticking out from the side of the chassis: they poke through from the inside (with body clips just on the outside of the plastic tub rails to keep them from getting pushed back in), and they’re drilled for 2 sets of body pins on the outer ends. The body only ships with clips on the outside of the body (preventing the sides of the truck from bending out, but not in). I added a second set of clips on the inside as well. The body has 8 clips holding it on: 4 on the ends of the posts, and 4 in the traditional place on the body mounts 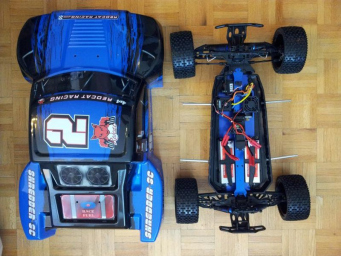 The tires are large, with a strange size of rim (at least I had never seen it before). Instead of a regular 4″ truggy or monster-truck rim, they’re 4.5″ in diameter. From left to right: a Losi LST tire on a Pro-Line Tech 5 (4″) rim, then the Shredder SC tire, then a standard Pro-Line truggy tire on 4″ Associated rim (4″ as well). The Shredder rims are larger, but the rubber is a low profile: making only slightly larger than the truggy tire. But it does use a standard 17mm hex. 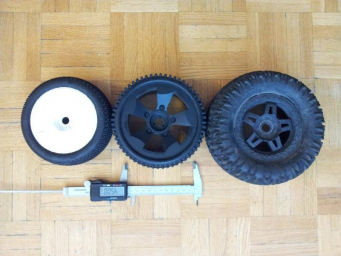 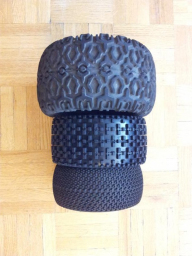 The foams in the tires are firm, and the profile isn’t rounded at all: they’re flat straight across. I was expecting a very hard RTR rubber… but actually they’re fairly soft (compared to the rubber Traxxas likes to put in their “wears-like-iron” Talon tires). The tread pattern has blocks about the same size as what’s on a Pro-Line Badlands 2.8″, except obviously many more blocks, with a slightly tighter spacing. Here’s the stock Shredder tires compared to the Losi LST rubber: 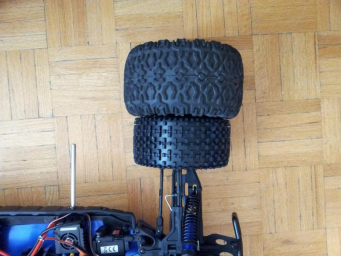 The tires have scuffed up nicely after about 3 sets of batteries: I think I’m going to like them! Although when they wear out I may just go back to standard 4″ rims to get a wider selection of aftermarket rubber, since I know I can keep the larger profile buy getting MT tires. Something like the Losi 420 pins look nice for bashing 🙂 . Note: You’ll want to use 1/2″-offset rims, as I found zero-offset truggy rims would touch the steering arms (i.e the LST tire mounted on the left in the image below is on a zero-offset rim, and is too close to the chassis and will bind with the steering arms). 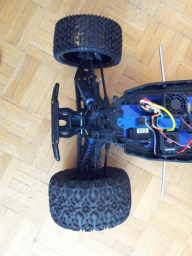 But getting back to the rest of the truck: it comes with the standard rebranded FlySky GT2 2ch 2.4GHz radio and receiver (second best bang-per-buck budget radio, eclipsed only by the FS-GT3B). There’s a paper manual for the car and to program the ESC, as well as a 2s/3s balancing slow lipo wall charger (which I’ll probably never use). 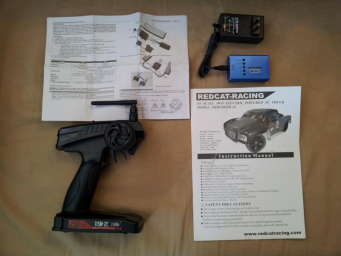 It comes with an 80a HobbyWing ESC: which sounds a bit small for a car of this weight, but pushed it around fine and didn’t even get warm. 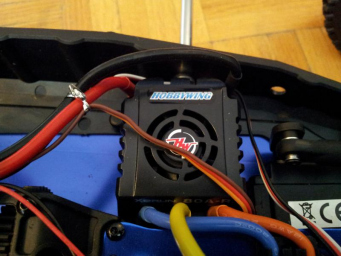 It has a 1500kv sensorless 3674 motor with Mod-1 pinion and spur (turning a standard shaft-drive front/center/rear sealed gear-diff drivetrain). Remember that motor in case HobbyPartz goes out-of-stock: it’s a very popular size for the price and if HP doesn’t have it ordering this one as a spare part from a Redcat dealer may be the way to go. I don’t know if it’s rated for 6s (ships with 4s worth of batteries), but I’m going to try it! 🙂 The motor comes with a heatsink and large fan: I like to see the bigger fans since they don’t seem to die as easily as some other small fans I’ve had before. 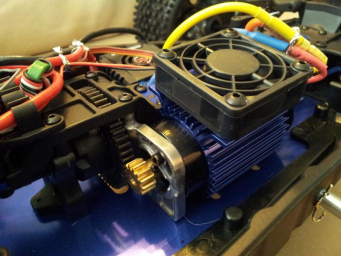 Speaking of batteries: it comes with 2 20c 3200mah 2s hard-case lipos, and everything (including ESC) are wired with common 4mm bullet connectors (which I replaced with Deans). They also have the worlds shortest balancing leads? 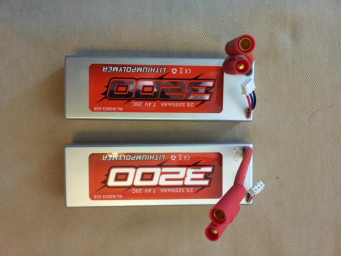 There is lots of room for the batteries: the straps that hold them in are adjustable, and there’s plenty of room in front/behind/beside the battery trays for larger setups. You could trim down the sides of the battery trays, Dremel slots through what’s left to hold velcro straps, and mount some impressively large packs in there. I have a few 5000mah 4s packs that I use in my truggy: I could easily dump two of them in there with a bit of trimming and just swap the series harness (2 x 2s) for a parallel Y-cable instead. Hello runtime! 🙂 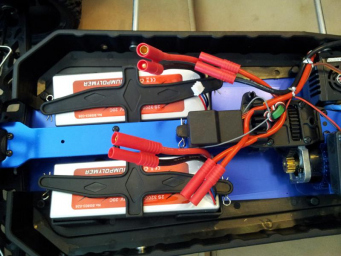 Finally it comes with a 9kg metal-gear steering servo. It’s plenty strong and I had no problems with turning radius or ability to turn the tires at speed, but it did feel a bit slow (but I’m comparing it to a Savox SC-1268SG on 7.4v in my truggy, which isn’t apples-to-apples). It was actually a nice surprise, since the Caldera is running identical steering components (with shorter arms) and it had lot of binding out-of-the-box. The Shredder steering was smooth without any fiddling with it. 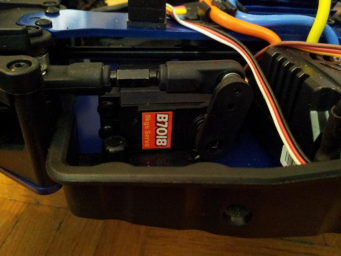 Another nice thing compared to the Caldera: hex hardware all around – no self-tapping screws! I couldn’t find a single Phillips screw anywhere, hooray! But even though the screws and bolts were upgraded, there was a lot in common with the other Redcat “10E” and “8E” (1/10th and 1/8th) vehicles. First, the pan chassis is a stretched version of what comes with the 8E cars: including the same center-diff: (see the 1-foot yellow plastic ruler for scale) 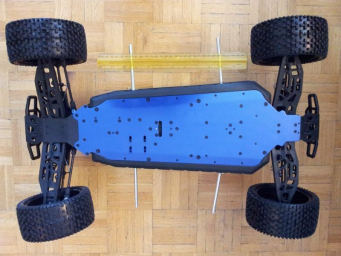 The shocks are upgrades: long-travel big-bore threaded aluminum, and the suspension comes out-of-the-box with swaybars (paid upgrades on the 10E’s), but everything else was the same. 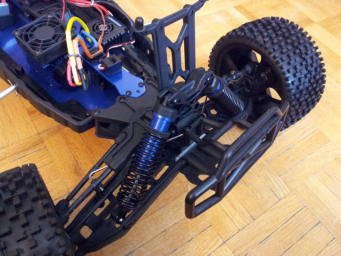 Here’s the Shredder (left) nose-to-nose and tail-to-tail with the Caldera (right). Same front and rear plates: almost the same bumpers (Shredder’s is a bit longer, but same mounts), same front and rear diffs and shock towers. Body mounts are the same style (can’t see them, but the Shredders are simply taller). Same hub carriers and front hubs (but Shredder hubs are the upgraded metal versions). Same servo saver bellcranks, and steering racks (Shredder gets the aluminum rack, Caldera has plastic). A-arm pin braces are identical etc. 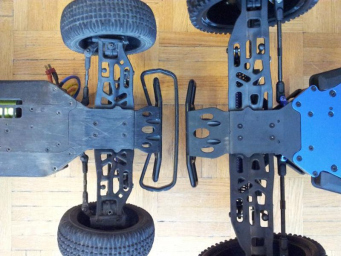 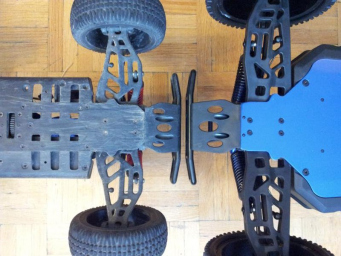 Other than the center diff and motor mounts (and motor/ESC etc) the powertrain on the 1/10, 1/8 and 1/6 (10E, 8E, and Shredder models) are identical except for the length of the driveshafts. It should be easy to keep these two SCTs running, since in most cases if I have spares for one it means I have spares for the other 🙂

Finally, here’s the Shredder SC beside my RC8Te, just charged up and waiting for the first drive. 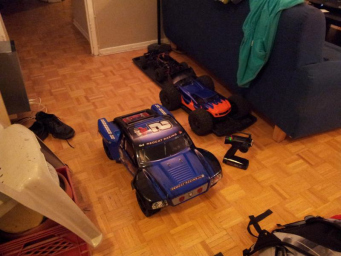 I’ve only put a couple pairs of batteries through it so far but I love how it drives. My 1/8th truggy drives nicer than my 1/10th models, and the 1/6th Shredder drives even nicer still: very easy to control during powerslides, and the back only comes around if you either chop-or-punch the throttle on gravel, or if you back off about 25% throttle on pavement. The huge chassis is very easy to clean: totally wide open so if you just flip it over and shake it 90% of the dirt just falls out (compared to my Caldera, with a chassis that’s 10% functional, and 90% nooks-and-crannies that trap dirt, mud and gravel). The radio was bound properly out-of-the-box, the batteries are putting out their rated capacity, and the steering and ESC trims were perfect without fiddling with them.

So far I love it, and the huge size turns heads when I take it to the local park. After telling you about all the good things, I do have a couple small nits to pick:

I’ve run into a few things already, and have a hole punched through the front of the right front fender, from a relatively minor disagreement with a cement post. Not sure if I’m unlucky, or if the body is a bit thin or brittle?

That’s all the notes I have time to make for now: I’m going to take some driving pics and hopefully video as well, soon. I’m going to drive it stock for a couple weeks, then consider putting the Shredder XT truggy body on it (like the open-wheel look, and gives me room for LST tires)… maybe swapping in my 150a Xerun ESC to try it on 6s, and if the servo is bugging me I’ll try my Savox 1268MG from the RC8Te to see if it would make a good upgrade.

Other than that, drive the wheels off 🙂